You are here: Home / Archives for Jeff Kendrick

That’s it Late Model drivers. Tighten up and go for it! 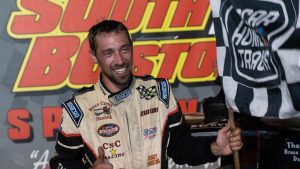 Crews will be busier than ever at South Boston Speedway this season — Nathan Crews, that is. Crews will defend his Budweiser Pure Stock Championship at the four tenths mile bullring. He will also be running a Late Model Stock Car for part of the season. He may also be wheeling his brother, Daniel Crews’s Limited Sportsman car a few times.

“We’re going to focus on the little car, and hopefully we can win another championship,” Crews said.

“If we had the money, we would definitely try to run all of the Late Model races. I’m hoping to shoot for running at least 10 Late Model races, maybe a few more. I might run a Limited race or two as well.”

Crews has stayed busy during the off season. He and his team completely rebuilt their four-cylinder race car. They also build a brand new Limited Sportsman car for his brother, Daniel. Meanwhile the team is seeking sponsors for Daniel’s Limited Late Model ride.

In addition to all of that, Crews started a new job working for sellers racing. He joined the HC Sellers team to help get things going for the 202o Season.

Crews hopes to continue last season’s success in the Budweiser Pure Stock Division. He dominated last year, winning nine races and finishing in the top five in thirteen of fifteen starts. He has every reason to be optimistic.

I can’t thank iRacing enough for their support as we move into the Truck Series this year.  They’ve been a long-time partner of mine, and I’m thrilled to continue that this season.  The entire organization has been working incredibly hard this offseason to make sure that we have trucks capable of taking our partners to Victory Lane. 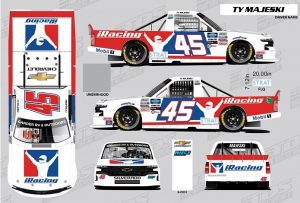 “We couldn’t help but notice Ty years ago, piling up wins and climbing to the highest oval skill rating on iRacing,” said iRacing president Tony Gardner.  “Not long after that, we got involved supporting his late model program and watched him stack up big wins in the real world as well.  It has been exciting for iRacing to be involved in his career progression, and we’re proud to be part of this next big step with Niece Motorsports.”

iRacing will also to sponsor Majeski’s ride at Martinsville Speedway, Richmond Raceway, and in the final race of the season at ISM Raceway.

Ty Majeski is one of iRacing’s most accomplished oval races.  In 2,535 starts, Majeski has earned 1,717 poles, 1,892 wins, 2,225 top-five finishes on the service.  As part of the partnership, iRacers will have the opportunity to race against Majeski throughout the season in a series of special events that will be announced at a later date.

Ross Chastain’s truck will also carry the iRacing colors and logo at Pocono Raceway this season.  Chastain led 54 of 60 laps on his way to victory lane at Pocono last season, and hopes to dominate once again.

Coming off of a very successful 2019 racing season, Billy Pauch Jr. only has one regret. He feels that there is one race that he feels he should have won. The one that got away was the 2018 East Coast Dirt Nationals. Pauch says it still bothers him more than a year later.

The Indoor Dirt Nationals return to the CURE Insurance Arena in Trenton, New Jersey February 21-22. This is the third year for the event which features 100 wingless 600cc Sprint Cars on the banked clay oval. Pauch expounds:

We ran a close second to Erick Rudolph. He was hugging the bottom and I was trying to make something happen on the top. I got to him but by the time I did, the top of the track had changed. I didn’t want to dump him which was the only way I was going to pass him. It was a tough loss. You hate to let a race you feel you should have won get away.

The 2017 Indoor Nationals were also disappointing for Pauch. He was a strong contender but got dumped during the feature race and the car’s steering was broken in the process. That was the end of his race.

Pauch will enter the Indoor Nationals in the same car he has driven in the past two races, owned by Lamar Schaffer from Pennsylvania. Schaffer is a popular Micro Sprint engine builder. Pauch has driven for Schaffer for the last eight years.

Race teams will arrive in Trenton for the Indoor Nationals on Thursday, February 20 for a closed practice session on the tacky dustless black clay. Friday will be the draw in which the field will be divided into ten heat races. The top sixty from the heat races will run four A-Main qualifying races. The top three from those races will lock in their spot in Saturday’s fifty lap A-Main.

For Saturday’s racing program, all drivers who were unable to qualify will be split into qualifying races by their Friday results. Each of these events, starting with twin F-Main races, transfer the top four to the next main until two B-Mains are reached. In the final B-Main qualifying races, the top six transfer to the A-Main which will start 24 cars.

Tickets are available at indoorautoracing.com

In order to help boost the car count for their next iRacing Winged 410 Sprint Car Series coming up in a few weeks, the venerable Dirty Old Bastards Racing League will be holding a four week qualifier series. This will be open to all drivers who would like a shot at by-passing the ladder system at DOB. Eligible drivers can try to earn their way right into the DOB 410 Series.

The series will run on Monday nights at 9:oo pm eastern time. The series will run, for the most part, just like the current World of Outlaws Wicked Energy Gum 410 Sprint Series runs with a couple of changes to the formats. The drivers that are currently in the DOB 410 series will be ineligible for this mini series.

Points will be on the line and just because you finish well in points or just because you meet the requirements to be eligible, does not mean that you will be guaranteed a an invitation to the DOB 410 Sprint Series. The league will be looking to take a minimum of five drivers from this series and invite them into their Thursday Night 410 Sprint Car Series.

The racing has been fantastic since the DOB League rebooted following a restructuring during the middle of 2019 Season Four. It’s nice to see 60 car servers get maxed out in less than two minutes sometimes, but the quality of racing kept falling off each season until it truly became no fun to run the shows anymore. The racing is now enjoyable again and the racing action is the best it’s been in Dirty Old Bastards League history.

The Dirty Old Bastards are looking for drivers who want to show up and take part in some fun and respectable racing. If that is the kind of racing you are looking for then DOB is the place for you. Each of the DOB Series will have a cap of 60-70 drivers as their goal is to focus on the quality of the drivers and racing instead of the quantity of drivers.

This mini qualifying series will be hosted from the DOB Special Events League. If you meet the requirements, you may go here to sign up for the series. This series will start Monday night, February 17. More info on the format and schedule is below.

Here are some basic details and rules: