You are here: Home / Logitech G27 Calibration and Settings for iRacing

This tutorial is here to help people get started with the Logitech G27 racing wheel. Since this was originally written, Logitech has released newer wheels, the Logitech G29 and the Logitech G920 wheels which are very similar to the G27. If you need help setting up a Logitech G27 or G29 racing wheel, have a look at this page. Calibration and settings for all three of these wheels is similar, but the new ones come with new software that is reported to work better with later versions of the Windows Operating System.

There are various opinions about setting up a Logitech G27, G29, or G920 wheel for iRacing. Most of them will work in one way or another. I have experimented quite a bit with my wheel settings and I believe I have found the settings that suit me the best on both asphalt and dirt ovals. At first I tried to follow any official iRacing instruction or documentation that I could find. In general that works pretty well and some people swear by those settings. After I had been an iRacing member for a couple of years I started experimenting with my wheel settings and found that the iRacing recommendations weren’t really the best for me in some cases.

The main thing about setting up any wheel you choose to use is to find the settings with which you feel comfortable and stick with them. I’m going to give you my own version of iRacing’s recommended wheel settings for Logitech wheels so let’s get to it, step by step.

If you have a preferred way to get to your Logitech wheel setting in Windows, open the Settings box. If you’re not sure, here are the steps:

You should now see one of these Windows, depending on how you got to the Settings. It’s the same information organized differently. If you’re using the new software provided with the G29 and G920 wheels, it will look quite different. Go here for those racing wheels. 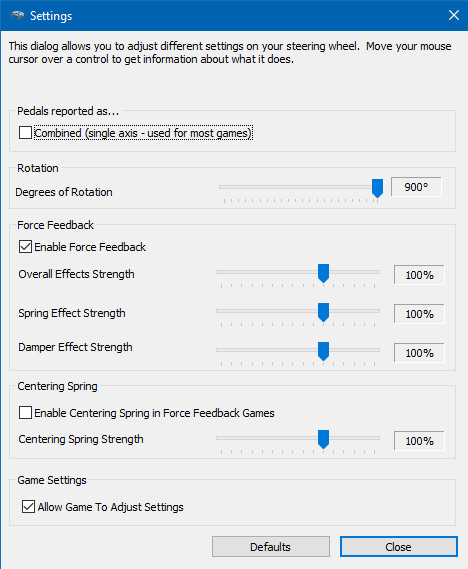 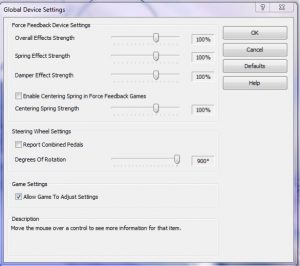 If you simply click the Defaults button then move the Degrees of Rotation slider all the way to the right to 900° you should be all set. Click Close, then click OK in the next window. If you have read about wheel settings either here or in the iRacing forums before, you might be scratching your head now. This is what iRacing recommends. Go with it and try it for a while or read on if you want to try my settings. I don’t recommend the iRacing settings for dirt oval racing.

The next thing to do is to open the iRacing simulation and calibrate your wheel.

Logitech G27, G29, and G920 Settings and Calibration in iRacing

Some or all of these settings may also work for the Logitech Driving Force GT (DFGT).

That is the way to set your Logitech wheel up as iRacing recommends. In my opinion, for most asphalt racing this is a good way to go; however, for short ovals and dirt I recommend different settings which I detail below.

Below here is the method and the wheel settings I last used before I switched to the Logitech G29 racing wheel. These are the same setting I use for the G29. Keep in mind that I run dirt ovals almost exclusively, but these setting work fine for me on short asphalt ovals also. If you have any comments, questions, or discussions, join Discord.

My Logitech G27 Settings in Windows

First of all I’ll go quickly cover the settings I used in the Logitech software in Windows. For better detail on this, look at my Logitech G29 and G920 page.

My Logitech G27 Settings in iRacing

These are my G27 wheel settings within iRacing.

That’s all I have for this Logitech G27, Logitech G29, and Logitech G920 iRacing setup tutorial. If you have any comments or questions, feel free to leave a reply below or Join OSR Voice/Text Chat.