OSRacing.net provides more than 2500 iRacing setups for the community. 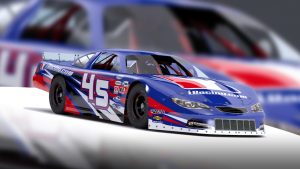 It was announced earlier that iRacing will be updating the asphalt Super Late Model car. The announcement was made in the iRacing forum for the Super Late Model by Tyler Hudson. Here’s what Tyler had to say:

I wanted to give you super late model drivers a heads up that big changes are likely on the way in a patch next week or soon after. These changes include aero, tire, and overall physics updates.

For the Open series, these changes will likely require setup adjustments. The updates will include updated baseline setups for the tracks on the schedule this season.

This update barely missed the normal quarterly build. Although not something we typically do, we think this will provide an overall better experience and therefore decided to go ahead and release in a patch. I have driven the car myself a bit in testing and it’s a wonderful update.

There is no further information about what has been changed or when the patch update will take place.

The iRacing Super Late Model car was updated a few seasons ago and has been a good car since that update. The last update moved the car, in part, out of the realm of extreme setup dependence and made it more of a driver’s car. Most of iRacing’s asphalt cars are far too setup dependent, making them more unrealistic. I’m not sure why this update is warranted, but I’ll keep a good thought and hope that the coming changes will make the car even better.

UPDATE: September 25, 2020 – iRacing announced that this update will take place next Wednesday, September 30 at 9:00 am eastern time. I’m looking forward to the patch and trying the updated Super Late Model car.

Tony Stewart told an interviewer Wednesday that he feels "It's time to get Kyle (Larson) back in sport." Larson was suspended indefinitely by NASCAR in April of this year, then fired by Chip Ganassi Racing after he used a racial slur in an iRacing event. Larson has discussed the incident in interviews with the press. “I made a mistake and I’m paying for it and I accept that,” Larson told the AP. “NASCAR is where I always wanted to be and I do believe I proved I can compete at the Cup level. I’d like to get back there and we’ll see if there’s a way. All I can do is continue to improve myself … END_OF_DOCUMENT_TOKEN_TO_BE_REPLACED

Ahnna Parkhurst drove her Richard Childress Racing Late Model to victory Saturday night at the famed Talladega Short Track. This win, her second of the season at TST, came in the Crate Racin' 604 Late Model division. Parkhurst stated: "Overall this was a good night for our team. Our night didn’t go as planned with the Super Late Model, but things happen, that’s just racing. Our Crate car was flawless. There were several cautions in the feature, but I was able to pull away by a few car lengths each time. Special thanks to Andrew, Ken and Dad. We made a bunch of changes throughout the night … END_OF_DOCUMENT_TOKEN_TO_BE_REPLACED

iRacing announced several weeks ago that the would bring a laser scanned version of the iconic North Wilkesboro Speedway to the service. Old School race fans figured that iRacing might just bring back some historic stock cars to run on the 1987 version of the track, and that's exactly what they're … END_OF_DOCUMENT_TOKEN_TO_BE_REPLACED

It was cold in Maryville, Tennessee Saturday night, so I was thankful for DirtVision. I watched the big Tennessee Tipoff race from my easy chair in my warm living room, and I'm glad I did. It was one of the best World of Outlaws Late Model races I've seen in a long time. I was treated to an amazing … END_OF_DOCUMENT_TOKEN_TO_BE_REPLACED

Josh Richards is the winningest driver ever in the World of Outlaws Late Model series, but it's been more than three years since his last victory. Richards was strong throughout the night at Duck River Raceway in Wheel, Tennessee. Another driver who had been fast all night was Dennis Erb Jr. Erb … END_OF_DOCUMENT_TOKEN_TO_BE_REPLACED