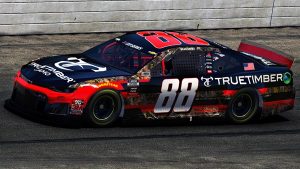 Dale Earnhardt Junior’s JR Motorsports has revealed a new partner for it’s iRacing eNASCAR entry. Veteran iRacing Brad Davies will sport TrueTimber Camo on his number 88 Chevrolet ZL1 Camaro for the 2020 NiS Season. The season begins on February 11 with the running of the virtual Daytona 500 at Daytona International Speedway.

I am looking forward to having TrueTimber® Camo on my number 88 Chevrolet this season in the eNASCAR Coca-Cola iRacing Series, Davies explained. TrueTimber has been a tremendous supporter of JRM and its grass-roots program over the years. I am committed to adding to their success in the online world against the top sim racers in the world this year.

Brad Davies is also involved in real world racing, working for the JR Motorsports team as an IT administrator for the NASCAR Xfinity Series and Late Model teams.