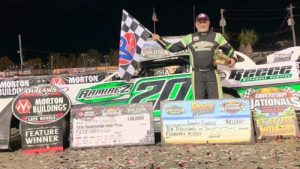 After this race, Brandon Sheppard is the WoO Late Model series point leader. The Late Models won’t race again until March 6 when the World of Outlaws roll into Lewisburg, Tennessee for a special Friday night race on the high banks of Duck River Raceway.

Old School Racing Motorsports has provided free setups and help pages to the iRacing community since 2013. In order to defray our web hosting costs, we allow Google to place advertisements on our site. You are welcome to use our help pages and download the setups provided, but we do ask that you disable any ad blockers you are using. All ads are provided by Google and are safe. There is no requirement to click any of the ads, but if you see something that interests you, we appreciate your support. Jeff Kendrick, Old School Racing Motorsports