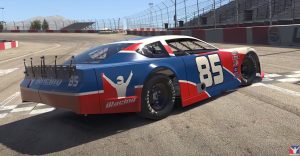 In the last few days we learned that iRacing will add the Bristol Dirt Track to its growing list of dirt tracks. Today it was announced that the Asphalt Super Late Model will be all new and upgraded.

The car’s updated bodywork will reflect the Next Generation cars that have been competing in the series. The updated car will be free to iRacing members who already own the current version of the Asphalt Super Late Model.

The Asphalt Super Late Model features a 358 cubic inch engine that renders more than 550 horsepower. The car only weighs 2800 pounds, features the weight distribution of a straight rail chassis, and has a fully adjustable rear suspension. It’s like a cross between an XFINITY car and a Tour Modified. The shape of the car’s body generates a tremendous amount of downforce, making the car capable of the highest cornering speeds of any stock car, including those cars used in NASCAR’s Cup Series.