You are here: Home / Archives for osr dirt 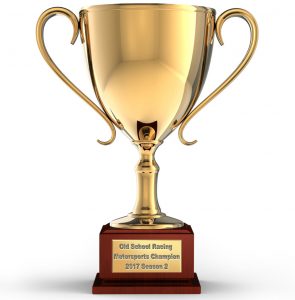 The Old School Racing Motorsports League put the wraps on its first season of dirt this evening with our iRacing Dirt Super Late Model race. I can’t speak for other league members, but I know I have learned quite a lot over the last two months about iRacing’s take on dirt oval racing. Overall, it’s been a very interesting season. I like a challenge and dirt racing has certainly been that.

We did also run partial seasons in our asphalt Street Stock, Modified, and Late Model Stock Car leagues. I wish there was enough time to continue with one of the asphalt leagues, but there simply isn’t with all of the dirt series that we are running.

At this time I’d like to congratulate all of the OSR Champions of 2017 Season 2, our final season of asphalt racing and our first season of dirt racing.

We only ran four races in the OSR Asphalt Street Stock League. The top 5 in points were:

The OSR Late Model Stock Car League was probably my favorite because the Chevrolet Monte Carlo SS is a fun car to drive. We ran eight races in the league this season and the competition was good. Congratulations to AJ Rogers on his championship.

The SK Modified is also a favorite of mine. We ran eight races in the OSR Modified League.

We had some very good regulars in the OSR Asphalt Leagues. I would love to see some of those guys find time to run on dirt with us.

We made a lot of new friends in the OSR Dirt Leagues. There was an influx of drivers from rFactor and Dirt Track Racing 2, and some iRacing old timers that we just had not encountered until we raced against one another on dirt.

The OSR 360 Sprint Car League is by far our most popular one. We normally have about 20 cars or more each week. Congratulations to Bruce Jones2 for his championship. Bruce won three heat races and two mains on his way to the championship. Here are the top five:

The OSR 410 Sprint Car League is also very popular. Ray Farlow was the man to beat in the 410s. Ray won one heat race and one main on his way to the championship.

The OSR Pro Late Model Championship was won by Zachery Dresslaer despite the best efforts of Zak Rounds. Dresslaer won 4 heats and 2 mains for the season.

We also came back to the Dirt Street Stock after abandoning it early in the season due to time constraints. Dan Collinsworth picked up his second championship in the OSR Leagues.

Next season we will continue to run the same series as 2017 Season 2, but our Wednesday night program will be moved to Saturday nights as I hope to bring more racers to the OSR Street Stock and Limited Late Model Leagues. There will also be format changes in a couple of the series. I will have the schedule including the format changes updated as soon as iRacing releases their dirt schedule for 2017 Season 3. The OSR Leagues will return to racing action beginning with the Friday Night Sprint Cars on June 9, 2017.