You are here: Home / Archives for nascar iracing series 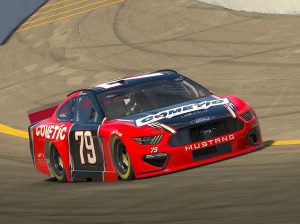 Brian Shoenburg, out of the Clint Bowyer racing stable, will feature Cometic Gasket and Traeger Grills as co-primary sponsors on his number 79 Ford Musting eNASCAR Coca-Cola iRacing entry for the 2020 season. Shoenburg has been competing in the iRacing eNASCAR Series for ten years and has an excellent record featuring 22 top-five and 51 top-ten finishes in 144 starts.

It’s a pleasure to welcome Cometic Gasket and Traeger Grills to the series at a time when it’s growing at such an incredible rate, Schoenburg explained. Everything about this car and the number 79 team is new for 2020, and we plan to put on a very professional and productive campaign for them. This is a building year for us and I think we can do great things with this car and give both of these brands some value throughout the season.

Cometic Gasket Inc. is a leading supplier of engine sealing solutions and gaskets for the automotive engine industries and is located in Concord Township, Ohio.

Traeger Grills invented the original wood pellet grill some thirty years ago and is a leading wood-fired grill manufacturer. The company is located in Mount Angel, Oregon.

Brian Schoenburg has plenty of experience in the NASCAR iRacing Series, and now has a new team with which to build and grow. He hopes to finish high in the points and to score at least one victory during the 2020 eNASCAR Season. Shoenburg will race alongside his teammate Brandon Kettelle.

Clint Bowyer is entertaining, and I like to be entertaining too, Schoenburg said. Representing his name will definitely be a cool thing… I don’t know if Clint knows it, but he got two pretty entertaining personalities, between myself and (Brandon) Kettelle.

If he got us together in the same Cup race, they would probably shut down the Cup garage at some point, that’s a guarantee, he laughed.

iRacing will kick off their eNASCAR Coca-Cola Series on February 11 at Daytona International Speedway.